Fascists not welcome in Cricklewood 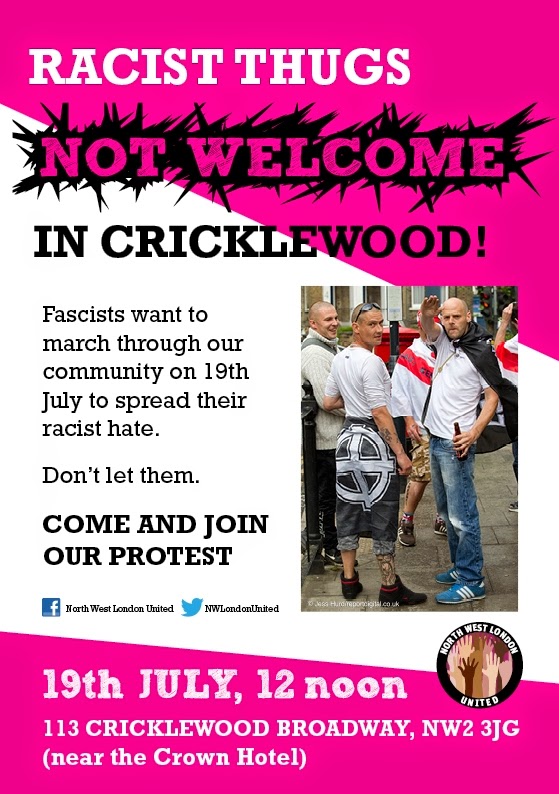 Make Willesden Green is participating in the North West London United campaign against a planned fascist march through Cricklewood this coming Saturday (19th July). Along with many other local groups and trade unions we have signed the statement below, and we hope that as many local residents as possible will join the protest at 12 noon on Cricklewood Broadway to say that racist hate is not welcome in our neighbourhood.


Fascists not welcome in Cricklewood

The South East Alliance (SEA), a group of racist, Islamophobic thugs is threatening to return to Cricklewood on Saturday July 19th. This group, made up of remnants of the Essex branch of the EDL, includes known fascists and has links to Ulster loyalists. They say they are demonstrating against the headquarters of the Muslim Brotherhood, but since that organisation moved to Austria in April before the SEA came to Cricklewood on 14th June, they clearly intend simply to bring their message of hatred to disrupt Cricklewood’s vibrant multicultural community.

In Cricklewood, as in the whole of North West London, we are proud of our diversity. Here people live and work together, children study, play and grow up together in mutual respect, regardless of faith or skin colour, language or place of birth. We will not tolerate attempts to divide us or stir up hatred. We stood united on June 14th to show the SEA that there is no place here for their racism and Islamophobia. We ask you to join us on 19th July to do the same again.
This statement has been signed by: