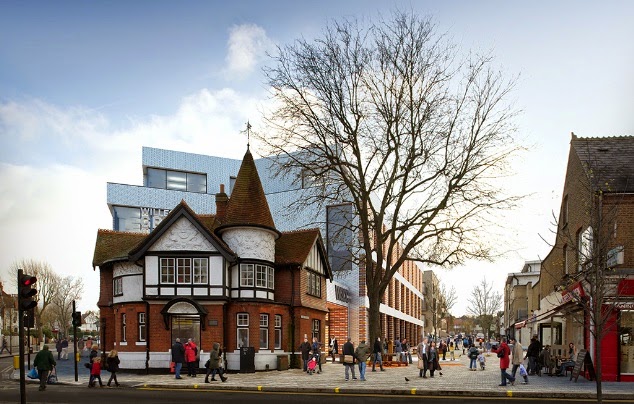 At the Willesden Green Town Team meeting on 1 September residents were shocked to learn from a Brent Council officer that a decision had been made to scrap the enlarged One Stop Shop (now known as Customer Services) at the Willesden Green Cultural Centre (WGCC), and instead let the space for commercial use.

The implication was that this would not be a commercial retail let to a bookshop or café but would instead be commercial offices in a similar vein to the current proposal to let 2 floors of the Wembley Civic Centre to Air France, which is currently under consideration.

Many residents will remember that the council’s original rationale for the building of the Cultural Centre included:
4.6 The Council is currently driven by the overarching concept of One Council. This aims to provide excellent public services and deliver these in the most efficient way but also to build strong relationships and better communications between the Council and citizens ensuring local priorities are addressed and that local potential is nurtured. A redeveloped WGLC will play an important role in this strategy supporting both the One Council Library Transformation Project and the One Council Future Customer Service Project.
4.8 The Future Customer Service Project aims to improve efficiency and clarity of the services offered to citizens. The strategy is dependent on developing a new customer contact centre at WGLC providing a service for the south of the borough, an area where many of the Council‟s high need customers reside.
Report adopted by the Brent Executive on 16 January 2012 http://democracy.brent.gov.uk/documents/s7189/rmp-willgreenreport.pdf

So to hear that yet another public facility (arguably the only part of the new Cultural Centre that represented an improvement for local residents) was being stripped from the new building was concerning, meaning a further reduction in community assets.

Both MWG and individual residents contacted some of our councillors and met with varying responses.
An enquiry on Twitter received an aggressive and unhelpful reply from Willesden Green ward councillor Tom Miller.

A full week later Cllr Miller was still none the wiser about what was actually happening but was at least a little more considered.

An email inquiry to Cllr James Denselow, the Cabinet Member for Stronger Communities asked the same question and got a vague response:

Other residents have had responses from both officers and councillors saying no decision has yet been made – and the council’s entire Customer Services programme is subject to a review which will report back in October – a response which flatly contradicts the council officer’s very definite statement at the Town Team meeting and leaves residents in a state of confusion, fearful yet again, that backroom deals to reduce public assets are being done behind our backs with no transparency or accountability. If indeed there is a proposal to reduce the physical Customer Services space (perhaps as a result of more transactions being done online) then the additional space can be well utilised by the community in this part of Brent, rather than commercial offices that offer no benefit to residents at all.

We note also that any attempt to change the Customer Services area to commercial offices should require an amendment to the original planning application for Change of Use to be discussed by the Planning Committee.

Meanwhile, after a reasonably amicable meeting in July, two months on we are still waiting for answers from Councillor Denselow to a series of questions we put to him regarding, among other things, the community input into the running of the centre and the process by which the agreed retail tenants will be selected (so as to promote more of a community venture or an independent business rather than yet another Costa coffee shop). A recent request asking for progress on answering our outstanding queries brought a two-word response:
“Will do”

However, one interesting feature which did come to light as a result of a residents’ recent email is that Cllr Lesley Jones states that :

“As for how centre set up and used, I have officers working on setting up an informal  ‘panel’ or ‘friends of’ the centre who could comment, suggest, complain on these aspects.  Expect panel to be local interested people from different perspectives, including original objectors to the development.  Early days yet, but invites to join a panel will go out eventually, probably in the new year.”

This was one of the suggestions MWG made during our meeting with Cllr Denselow so we’re pleased to see they are taking up our idea. Nevertheless, on current form it will be down to us to make sure this is real resident involvement and not an attempt to hoodwink residents into some form of sham consultation as happened with the proposal to build the centre itself. We await our invitation.