A Sorry Tale of Two Boroughs 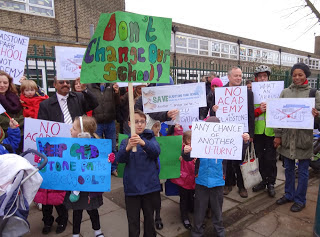 It is likely that next week Governors at Gladstone Park Primary, the local school for many children living in Willesden Green, will decide to become an Academy, handing over this Local Authority (LA) school to a private sponsor. This comes after a six-month campaign by parents and staff to keep Gladstone Primary under LA control HERE. Over in Redbridge, northeast London, staff and parents also organised during the summer to keep their school under LA control after it was put in ‘special measures’ by Ofsted and threatened with forced academisation. Yet Snaresbrook Primary last week won its battle against the Department for Education (DfE) and will remain a LA maintained school.

What explains this contrast in fortunes? How did a Tory-controlled Redbridge manage to fend off the DfE, while a Labour-run Brent sat on its hands watching the unwanted academisation of Gladstone Park Primary? The answer essentially lies in political will.

The Save Snaresbrook campaign had cross-party support from Redbridge Councillors, Council officers and their local MP John Cryer who actively sought to keep the school under LA control. Redbridge Council immediately and unanimously passed a motion opposing the academisation of Snaresbrook Primary and forcefully made their case to the DfE HERE. The Council also backed change in the school’s senior leadership - a new Executive Head and Associate Head were appointed and they immediately got on with the task of improving the school under the LA umbrella.


When I joined a parent delegation to meet our local MP Sarah Teather in February, she told us fighting academisation was futile and the best we could hope for was to try and find a sponsor that met our school’s ethos. Soon after, a 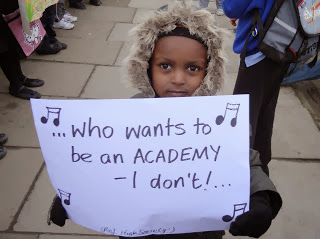 Gladstone Park Parent Action Group was formed and we campaigned vigorously for our elected officials and senior Council officers to fight to keep our school under LA control. The spectrum of responses to our efforts stretched from apathy to hopelessness. Senior Council officers reiterated that there was no alternative to academisation (and that it ‘wasn’t so bad’, anyhow); Willesden Green Councillors remained silent on the issue, while Cllr Butt was asked to instruct his senior officers, including the Council’s Chief Executive, to oppose the academisation of our school. He sent a letter to Sarah Teather instead. To his credit, Dudden Hill Cllr Hirani did correspond with the DfE, but without wider Council backing such lonely voices inadvertedly detracted from our campaign.

It is this frustrating experience of indifference toward, lackluster opposition to and in some cases, complicity with the privatisation of Gladstone Park Primary School that has in large measure led me to stand as an independent, grassroots candidate for Willesden Green in the forthcoming Council elections. On this, as in other key issues affecting the ward, our elected officials have lacked the political backbone to stand up for their proclaimed principles, hiding instead behind the faceless authority of senior Council bureaucrats. Local residents deserve better than this. It now falls upon us to stand up for our own neighbourhood, to defend the public assets we all rely upon and thereby make Willesden Green more democratic.
Posted by Alex Colas at 08:18